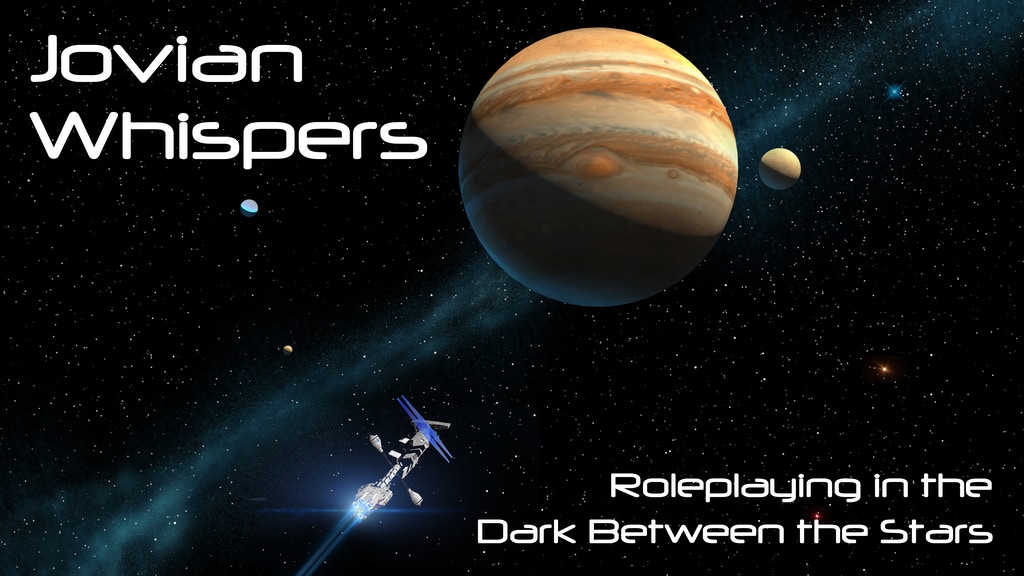 Jovian Whispers is a campaign and sourcebook for the Shadows Over Sol roleplaying game. It follows up on the mystery of the Jupiter Group Incident, in which all four Jovian colonies went suddenly and inexplicably silent. No one knows the cause of this mysterious event, but somewhere in the dark and ruined colonies of Jupiter the Insurrection Virus uses its clanking machines to plot the downfall of all humanity...

Latest Updates from Our Project:

We have just sent out the first few backer surveys as part of a smoke test. If this test doesn't reveal any issues with the survey, most of you will receive yours on Thursday.

Once you receive yours, please fill it out ASAP. Doing so is necessary to fulfill your rewards. If you have not received a survey by Friday, please let us know and we'll make sure that you get one.

For the past two weeks, we've been hard at work on Jovian Whispers. Everything is currently progressing on schedule. If you follow us on Facebook or Twitter, you will soon see a couple two-page spreads, complete with art. Here is where things currently stand:

We're really been blown away by the amount of support that you've shown us. This is without a doubt one of our most successful Kickstarters ever. You are all awesome! And I know we say this a bunch, but we really couldn’t have done it without your support. Thank you from all of us at Tab Creations!

As you likely know by now, the funding period ended a few moments ago with a final pledge total of $11,774! This means that not only are we been fully funded, but together we unlocked SEVEN stretch goals as well.

We’re really excited about this, but this isn’t our first Kickstarter. We know that for us, now that the funding period is over, it’s time to buckle down and continue pushing this game through to its final stages of production. We’re proud to say that we have never been late sending backers their rewards, and we have no intention of starting now!

We’re planning on sending out Kickstarter updates to everyone about once a month, this way we can keep all of our backers informed about the campaign’s progress. If you’d like to receive updates more frequently than that, we highly encourage you to follow us on the two following social networks. We will make updates to these pages about once a week, giving people the latest news about the game.

You can also keep us with us, or discuss our game, through our development blog or on our forums. Additionally, we have a Patreon page if you are interested in helping support future releases of our various game lines.

The Next Couple Weeks

It usually takes Kickstarter about two to three weeks to process pledges and release the funds. We plan to send out the first monthly update at that time. It will include information on the state of Jovian Whispers and the unlocked extras. Until then, here’s what you can expect from us:

We're on fire! Today we unlocked the System Hacks document, featuring a variety of optional rules for tweaking the tone and game play of Shadows Over Sol. Next up is a fourth short scenario following up on one of the many plot threads introduced in Jovian Whispers!

And remember, the next goal may also be unlocked as part of our Patreon Challenge! That is, Tab Creations has a Patreon where every three months we release an adventure or other short supplement. We are currently one patron away from unlocking Scenario #4 and three patrons away from unlocking the Jovian Missions compilation! That's so close!

Tune in tomorrow (05/21/2021) at 8:30 pm CDT for a Q&A with the author in the Randomworlds RPG chatroom. The log of the Q&A will later be posted to the Hardboiled GMshoe's website.

Interview With Mildra the Monk

Last week the author was interviewed by Mildra the Monk regarding Jovian Whispers and Shadows Over Sol. Check out the interview on his YouTube channel!

Shadows Over Sol on Weave the Tale (Almost)

A one-shot of Shadows Over Sol was scheduled yesterday on Weave the Tale. Unfortunately some technical difficulties prevented the session from taking place, but you should still check them out!

$8000 or 33 Patrons - One-Sheet Scenario #4 - This stretch goal unlocks a fourth short adventure supplement for Shadows Over Sol, following up on one of the many plot threads introduced in Jovian Whispers. It will be made available to all backers in PDF. This goal may be unlocked either at the indicated dollar amount or at the given number of Patrons on Tab Creations' accompanying Patreon project.

$9,000 - Jovian Epilogue - This stretch goal unlocks a short PDF with an epilogue, describing some of the ways that the Sol system, and Jovian colonies, might change in the wake of the events of Jovian Whispers. It will be made available to all backers and patrons.

35 Patrons - Jovian Missions Compilation - Tab Creations has a Patreon where every three months we release an adventure or other short supplement. If we can increase our Patreon to 35 patrons by May 31, we will release Jovian Missions, a PDF and print compilation of all the extra PDFs unlocked by this Kickstarter. It will be made available to all backers and patrons, and available in print as an add-on.

Finally, thank you all so much for your support! You are amazing, and we couldn't make these awesome games without you!

Earlier today we reached the campaign's fourth stretch goal! It unlocked a short scenario, following up on one of the many plot threads introduced in Jovian Whispers. This scenario will be made available to all backers in PDF.

Next up is the System Hacks supplement, which may be unlocked either at $7000 or upon reaching 33 Patrons. Right now we are just one patron away!

As always, thank you so much for your support. You guys are awesome, and we couldn't do it without you!

$7000 or 33 Patrons - System Hacks - This funding level unlocks a short PDF supplement featuring a variety of system hacks and optional rules for tweaking the tone and game play of Shadows Over Sol. It will be made available to all backers and patrons. This goal may be unlocked either at the indicated dollar amount or at the given number of Patrons on Tab Creations' accompanying Patreon project.

$8000 - One-Sheet Scenario #4 - This stretch goal unlocks a fourth short adventure supplement for Shadows Over Sol, following up on one of the many plot threads introduced in Jovian Whispers. It will be made available to all backers in PDF.

35 Patrons - Jovian Missions Compilation - This stretch goal unlocks Jovian Missions, a PDF and print compilation of all the One-Sheet Scenarios unlocked by this Kickstarter. It will be made available to all backers and patrons, and available in print as a $5 add-on.

The Jovian Whispers Kickstarter launched a week ago today and it's doing great! Thank you so much for your support! And a special heartfelt shout out to everyone who has helped spread the word!

The initial funding goal was met in the first day. Since then, the Kickstarter has blown through three stretch goals, unlocking two scenarios and the Sol system poster map.

Additionally, as of the time of this writing, we're only $725 away from unlocking a third scenario and two patrons away from unlocking the System Hacks document. If this momentum keeps up, Jovian Whispers is in the running to be one of our Kickstarters ever!

We truly couldn't fund this campaign and sourcebook without your support. Thank you!